The Colorado whitewater rafting industry has a culture all its own. Especially in hotbed locations like Cañon City, Salida, and Buena Vista, the river pervades nearly every aspect of life. People from around the world flock to these locations to take on challenging whitewater and soak in the amazing scenery.

If you have ever taken a river trip down Browns Canyon National Monument or the Royal Gorge , you have likely heard raft guides use unique terminology. Importantly, whitewater enthusiasts use unique terminology to describe boats, rivers, and tools of the trade. If you are interested in planning a Colorado river trip, it’s not a bad idea to brush up on common types of white water rafting slang.

When it comes to boating and navigation, river rafters share much of the terminology used by other water enthusiasts, such as sailors and kayakers. Therefore, a good way to get up-to-speed on rafting slang is to pay attention to the words and phrases used in popular boating culture.

Here are some popular examples of boat slang: 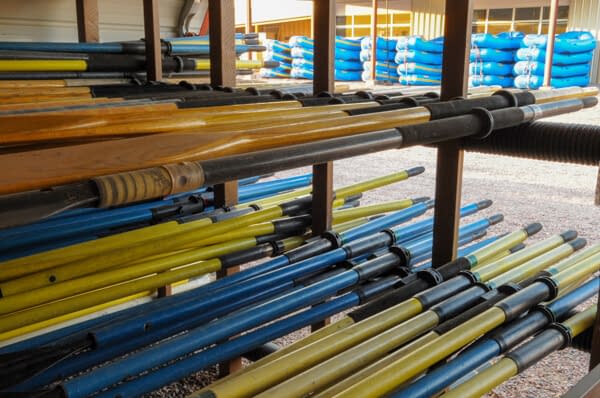 Paddles & Oars: Oars and paddles are commonly confused. Paddles are the short water propulsion devices commonly used to power rafts on guided trips. On paddle boats, each rafting guest has a paddle in-hand and helps power the boat in response to the guide’s paddle commands. Oars are longer than paddles, roughly 9 plus feet in length, and are attached to a frame that is secured to the raft. On commercially guided trips, guides will sit on the frame and both power and control the raft using the set of oars. On oar boats, guests can choose to not paddle and instead, hold onto a handle and enjoy the scenery without the need to paddle.

Line: In rafting, “line” is the term used to describe the route that your boat will follow as it floats downstream. To avoid rapids and obstacles, guides often visualize a line before entering a stretch of river.

Bow & Stern: These two terms are used universally in boating. The bow is the front of the boat and the stern is the back of the boat. Paying careful attention to the use of these key terms will get you a long way on your Colorado river trip. 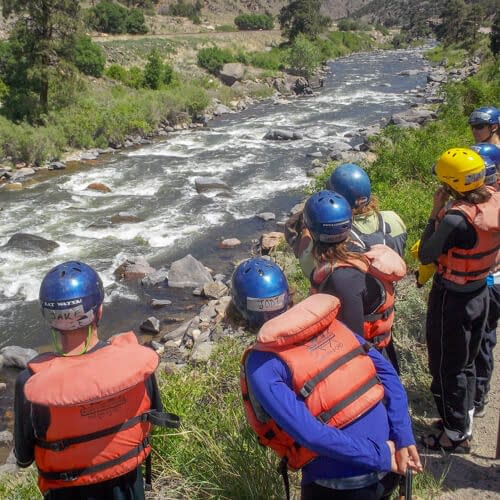 After you have familiarized yourself with the terminology used to describe boats and navigation, you may want to learn about the lingo of the river itself. Whitewater rafters have developed immensely creative slang to describe the many features of rivers. Taking a few moments to read these terms will help you be better prepared for your next river trip.

Run: The term “run” is used to describe a section of a river that will be rafted in a single trip. Likewise, “running” a river is the process of floating down a specific section of water.

Wave: Waves are the cresting bumps in rivers that are caused by the reaction of fast-moving water and objects beneath the surface. River waves take on many shapes and sizes, you can even surf on some river waves!

Wave Train: Wave trains are a series of repeating waves found within a set of rapids. Because they offer continuous action, wave trains provide a fun ride for whitewater rafters.

Chute: The term “chute” is used to describe the place where river water flows quickly between two obstructions where there is also significant gradient, or drop in the river. For example, at some water flows there are sections in the Royal Gorge on the Arkansas River where the current is carried between a couple large rocks where there happens to be a good drop – this could be called a chute, and it leads to fast water and an exciting ride. Chutes can also caused by boulders and large logs. 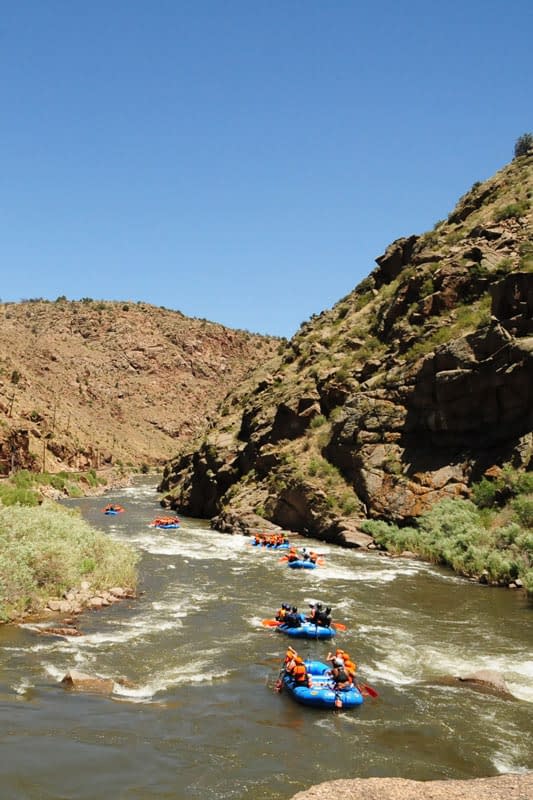 Eddy: An Eddy is an area on the edge of a river where the water spins – it turns back upstream in a whirling motion filling a void just downstream of an obstruction along the bank of the river. Eddies are formed by the shape of the river bottom, the size of the obstruction sticking out from the river bank, as well as the curvature of the riverside. On mellow trips, eddies can offer a great place to pull off and take a break. However, an eddy can be quite aggressive when the water is high and pulling strongly.

Pillow: Pillows are smooth, uplifted currents that form on top of partially submerged objects, such as rocks and logs. When looking at a river, pillows are slight bumps in the water that don’t fully crest like waves.

Confluence: A confluence is a place where two flowing bodies of water come together into a single current. Confluences can occur between two rivers, or a stream and a river.

Rapid Classifications: River rafters have a set of classifications that describe the difficulty of rapids. The difficulty rating is described in terms of Class I – Class VI rapids. The easiest of these rapids, Class I, represents flat water that beginners can easily float on an inner tube. As the classes progress, so does the difficulty of the trips. The hardest rapids feature huge waves, strong currents, and dangerous waterfalls. The most challenging rapids, Class VI, are typically considered unrunnable and should not be attempted.

The team at Echo Canyon River Expeditions loves to share our knowledge with customers. Please Contact Us to learn more about whitewater rafting.