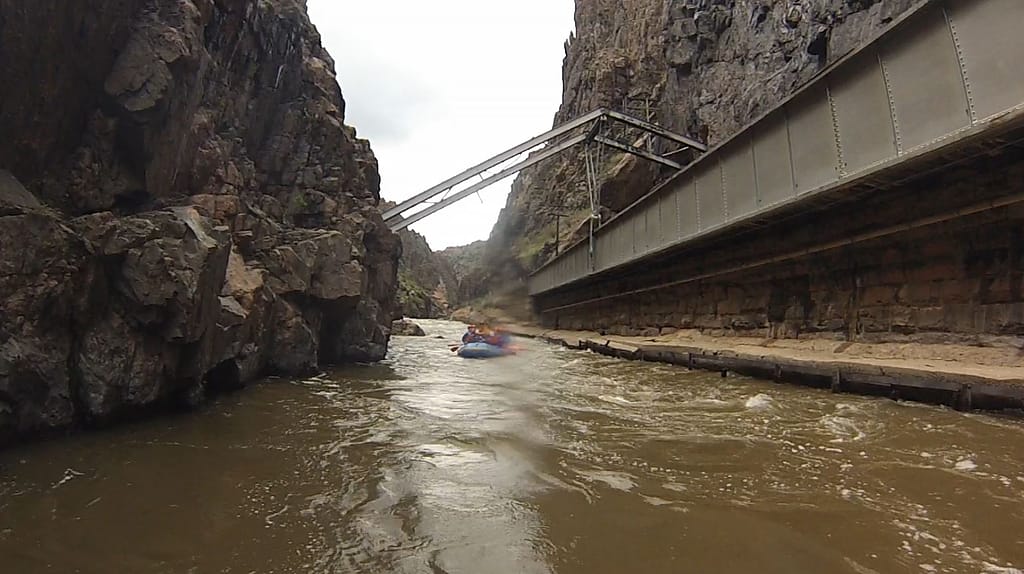 Whether you're on your first or your fiftieth trip Royal Gorge white water rafting, there are plenty of historic sights to keep you occupied - if you're not busy paddling, that is. Check out our list of interesting sites to look for when you're down there...and see how many you can spot! 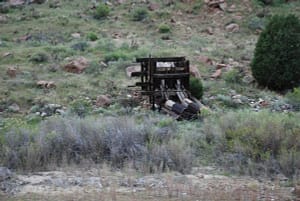 On river left, about 15 minutes after you begin your Royal Gorge white water rafting trip, you will see the remnants of an old sluice box. This mining technique, which was most often used for gemstones, gold, or tin, utilizes a constant flow of water to help separate base materials from heavier, more valuable particles. While this sluice is no longer in use, you may also see a more modern version closer to the river, which is still used today. Many towns in Fremont County were built during the boom and bust mining eras of the 1800’s. Rumor has it that there is still plenty of gold left in the Arkansas River. 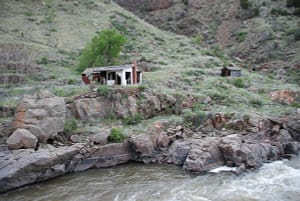 The caretaker’s house hearkens back to the day when the pipeline (remnants can be seen throughout the Gorge) was the main source of water for the city of Cañon City. The caretakers lived in this small home and were responsible for the maintenance of the pipeline throughout the year – even in the cold, sunless, frosty winter months. At times, the caretakers had families, and they used the railroad to take weekly trips into town for supplies and a brief reprieve. They crossed the river via a small footbridge, parts of which can still be seen on river left.

In the deepest part of the Gorge (over 1,050 feet), the walls of the canyon are only 30-40 feet apart, giving this section the name “The Narrows”. This section of the river was particularly difficult to navigate for AT&SF railroad engineers in the late 1800’s. The Hanging Bridge was considered a modern marvel when it was constructed in 1879 . Originally, the entire weight of the bridge was supported by three steel A-frames, but it was later fortified by rock and concrete when the train upgraded from narrow gauge to dual gauge in 1890. Famous visitors include President Theodore Roosevelt in 1905, who stopped in Cañon City on his tour across the country.

You definitely won’t have time to look around you while going through Sunshine Falls (the rapid) on your Royal Gorge white water rafting trip, but a little further downstream you can see the actual falls that the rapid was named for. Look for a small railroad bridge and peer upward. You’ll see a towering monolithic series of rocks and falls that is downright majestic when it flows. You’re most likely to see a waterfall in the early spring or after a heavy rain.

What is now a beautiful scenic pathway was once part of Cañon City’s gravity-fed water delivery system. Up above river left, you will see a bridge, three tunnels, and 3 miles of graded road that used to house the pipeline. A fourth tunnel in the series is located next to Hwy 50 just before the Territorial Prison. The entire route was built by prison labor, which was one of the reasons Cañon City opted to be the site of the oldest prison west of the Mississippi. Prisoners also built and graded Skyline Drive – another Cañon City sight that should not be missed. The historic walkway is accessed by turning on Tunnel Drive from Hwy 50 and parking at the end of the road at the trailhead.

For more information on history in the Royal Gorge, we highly recommend ‘Rails Thru the Gorge‘, by Doris B. Osterwald. It offers dozens of photographs, stories, and maps depicting the history of the Gorge, the railroad, and Cañon City. Check it out before you book your next Royal Gorge white water rafting trip. You’ll find that it adds even more fun to your trip as you try to spot the landmarks you know…and some that you can look up later.