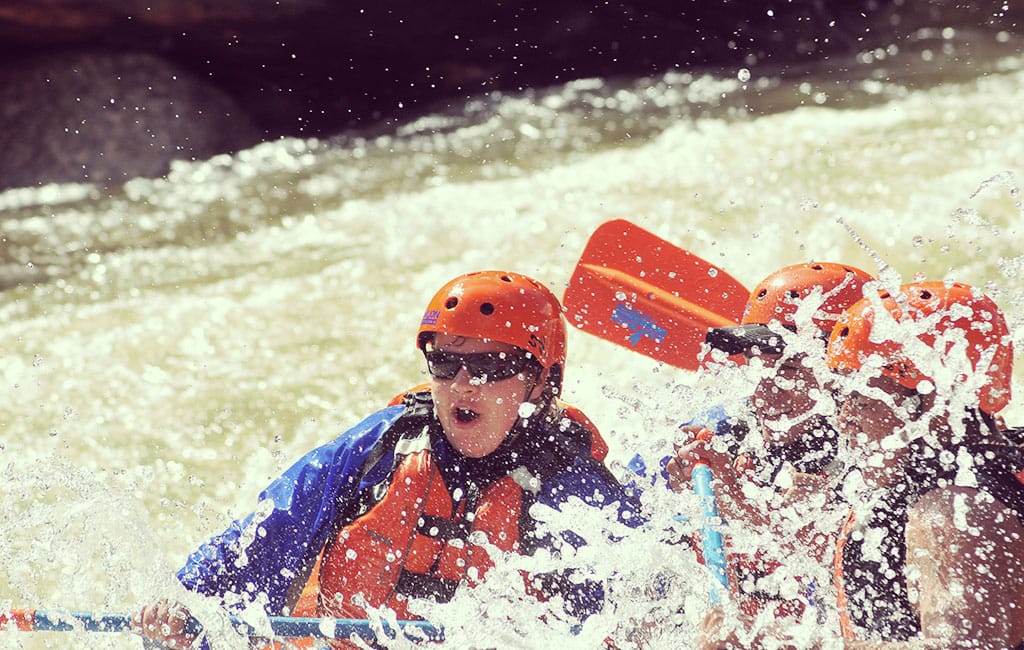 Best Time to Raft in Colorado

Let’s face it. We all have certain expectations when we reserve a whitewater rafting trip. Those of you adrenaline-hungry ‘big kids’ want the biggest, scariest whitewater possible. Parents with young children want a rafting experience that gives your family a taste of whitewater with some fun splashes but you don’t want to freeze, right? So let’s look at the best times depending on whether you are reserving a trip for big kids or little kids.

Families looking for the best time to schedule a raft trip should consider late June to early July. The reason? You see good whitewater with plenty of splashes but not the huge adrenaline-charged whitewater that has your guide saying at the start of the first rapid, “I give us a 50/50 chance of making it today.” Yeah, no parent wants to hear that! The beauty of this time of year is that it’s starting to warm up; average day time high temperatures are in the mid to upper 80’s. The river is starting to warm up, too. It’s not uncommon to see river temperatures around the mid 60’s in early July. Yes, that’s still chilly but it feels pretty good on an 85 degree afternoon.

Another bonus to early July rafting is that you will be beating the crowds of the heart of travel season in Colorado. Fourth of July weekend is always fairly busy, but if you can dodge that weekend you’ll be rewarded with the best of it all to make for a wonderful family rafting trip.

Best time to raft for adventure seekers – early to mid-June

Seasoned rafters know that the highest river flows on most Colorado rivers occurs in early to mid-June. On the upper Arkansas River (like the Royal Gorge section) the average date of peak volume flow is somewhere between the first and third week of June. If you are planning a raft trip for a group of adults or older teens who are in fairly good shape, have swimming ability and want the big whitewater hits, then look focus on this time frame.

What can you expect for weather and river conditions during June? Well, it can still be cool. Average day time temperatures in the Royal Gorge area are in the mid 80’s in June. Water temperatures are often times in the mid to upper 50’s when we see the higher spring run-off. Plan to wear some synthetic layers to stay warm and comfortable and you should strongly consider renting a wetsuit to maintain body heat. As a guide and rafter myself, it’s well worth throwing on an additional layer if you want the big hits and frequent waves going over your head!

But my vacation time is late July or August. Is the rafting still good then?

Rafters on the Arkansas River are fortunate in that there are several reservoirs near the headwaters of the river that begin releasing water as natural river flows decline to benefit the rafting community. In fact, part of the use fee all rafters must pay goes towards the fund that pays for this late season river water. Another ally on our side as rafters is the fish population. The Arkansas River is a very healthy fishery and Colorado State Parks wants to keep it that way, so the reservoirs will continue to release enough water to maintain a healthy fish habitat. Coincidentally, this ‘healthy fishery level’ is enough water for us to raft on!

We’ll go into more detail about how the different river levels will influence your trip in a later post. Until then, keep thinking snow!